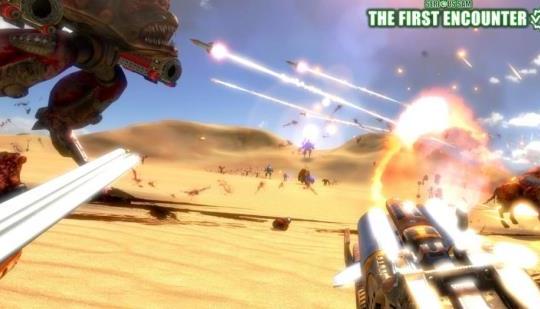 With cattle-on-human homicide on the increase in the UK, I think the time has come for ramblers’ groups to replace their standard ‘keep dogs under control when close to livestock’ advice, with something a bit more robust. Trampers of the British countryside, ‘if charged by an enraged bull, stand perfectly still until the animal is a few feet away, then unload both barrels of your shotgun into its slavering face before stepping smartly to one side.’

Ah, Serious Sam — reassuringly violent and educational. In 2001 this shooter from the land of… um, Dalmatians and quirky package holidays, whipped PC gamers into an ecstatic froth with its frantic, open-plan slaughter and waves of ferret-mad foes. Now it’s back, attempting the same trick with prettier pixels.

On hearing that Croteam was sprucing up Serious Sam: First Encounter with the help of the Serious 3 engine, my first thought was, why bother? Visually, Sam’s original outing has, like Battersea Power Station and Helen Mirren, grown old rather gracefully. Its sunny Egyptian settings and colourful, cartoon-like weapon fodder still look remarkably good today. They’re certainly not a reason to shun it. What can a new graphics engine possibly bring that will justify that £16 price tag?

The year Sam participated in the Pamplona Bull Run, the event was a lot shorter than usual.

The short answer is: not a lot besides some pretty bump-mapping, lighting and particle effects. 20 minutes in, you’ll probably have stopped noticing the glistening skins of the Gnaar beasts, the velvety shadows inside temples and tombs, and the pleasing way the wind tousles palm trees and drives dust clouds across dunes and courtyards. You’ll have stopped noticing because such beauty goes with the territory these days, and — more significantly — there’s only so much scenery-admiring a man can do when he’s busy blasting the tar out of 20 bazillion scuttling, galloping, sprinting, hopping horrors.

For Serious Sam HD to be an essential purchase for those of us that have seriously Serious Sam-ed in the past, it needed something else beside the facelift. A new level or two would have sufficed. The 15 included are just about large and well-populated enough to fill a week of evenings — several weeks if you diligently search out every secret, brave the higher difficulty levels, and investigate co-op, but they are identical to the levels you’ll find in a bargain-bin copy of the original game. I refuse to believe Croteam’s map and mission teams are so consumed with SS3 work that they couldn’t find the time to knock together a fresh mini-campaign.

Shoot the boss or screenshot him. The classic reviewer’s dilemma never gets any easier.

The nagging sense of familiarity might also have been dissipated by a simple survival mode or new weapon or gadget. Dump me in a purpose-built obelisk quarry or partially flooded Nile village and let me see how long I can survive the claws, teeth, hooves, bullets and bombs of increasing concentrations of ravening foes. Let me sow land mines in the tense lulls between attacks, then draw spawned enemies towards them. Give me a bile jar or inflatable decoy-type gizmo to help buy breathing space. There are numerous ways. A little developmental effort could have ensured there was clear blue oasis water between SSHD and its much-loved ancestor.

Of course, if you’ve never partaken before, such issues will be irrelevant. Series virgins after a shooter that doesn’t take itself too seriously or stop every five minutes to present a puzzle or relay another tedious chunk of narrative can slap their cash down with confidence. The cut-scenes are few, the periods when your trigger is unsqueezed, short. Considering the mountains of ammo expended and masses of monsterkind neutralised during a typical hour of play (in my first evening with the game I culled, according to the stats page, over 17 hundred of the blighters) it’s remarkable that fatigue or boredom never set in. I thank the targets.Bound together by nothing but beeline AI routines and an overwhelming urge to murder you, the 18 types of enemy are lovely things to liquidate. Hosing a herd of Kleers (giant hoofed baboon skeletons with hooks for hands) with a steaming mini-gun and watching the bones fly = Fun. Shotgunning a charging Sirian Bull then stepping out of the way as its massive blood-spattered carcass somersaults past = Fun. Frantically pistol-sniping caterwauling kamikaze bombers as they sprint towards you from all points of the compass = Fun. Slaying plagues of leaping frog-like Marsh Hoppers with a chattering tommy gun = Fun.

Actually, that last one, not so much.

The larger foes have been re-textured, re-animated and re-sculpted with real skill, but remain as implausibly stoic as ever. Beasts like the half-man-half-scorpion Arachnoids and the multi-limbed snot-hurling Reptiloids will happily sit tight as you plink their extremities from the safety of a pillar or wall. Not that helpful barriers are always available.

Having spent the last couple of days GBHing the infected with guitars and cricket bats in Left 4 Dead 2, it’s not easy to get excited about Serious Sam HD’s conservative gun selection. There are 10 weapons in all, ranging from a hunting knife to a portable ship’s cannon. Each has its role, and has been attractively refurbished, but don’t expect any fancy sniper sights, secondary fire or melee modes. Point it, shoot it, is the Serious Sam way. Even reloading is automatic. Only ammo exhaustion — the dreaded metallic click of doom — breaks the rhythm of a death-rampage.

If you do find yourself staring at a wall of galloping Gnaars or Kleers over the muzzle of an empty rocket or grenade launcher, then pray there’s a comrade or two at your elbow. SSHD inherits First Encounter’s famed co-op multiplayer. Not only can you slay your way through the full campaign with up to 15 chums (naturally, the larger the party, the more opposition), but you can tweak the challenge in countless pleasure-extending ways. Want limited respawns, infinite ammo, or friendly fire? Select it. Want the beasts barring your way to be up to four times tougher than the ones in the stock game? You’re plainly stark-staring bonkers, but go ahead, nudge that slider.

Gnaar blocking your view of a pleasant desert vista? Create a window with Mr. Shotgun.

In my brief taste of team play (finding comrades has been tricky in the run-up to the launch) I’ve come across no serious problems with stability or lag. Creating a game or joining one in progress is painless, and the swollen ranks of foes in communal sessions turn already impressive scraps into jaw-dislocating carnivals of carnage.

If instead of removing the two-player split-screen mode that graced First Encounter, Croteam had bolstered multiplayer with some bold new modes (a versus or scarab collection mode might have been interesting) Serious Sam HD could, over the next few weeks, have dragged me away from L4D2 on occasions. As it is, for all the added beauty and inherited class, I don’t think there’s enough freshness or sophistication here for that to happen.