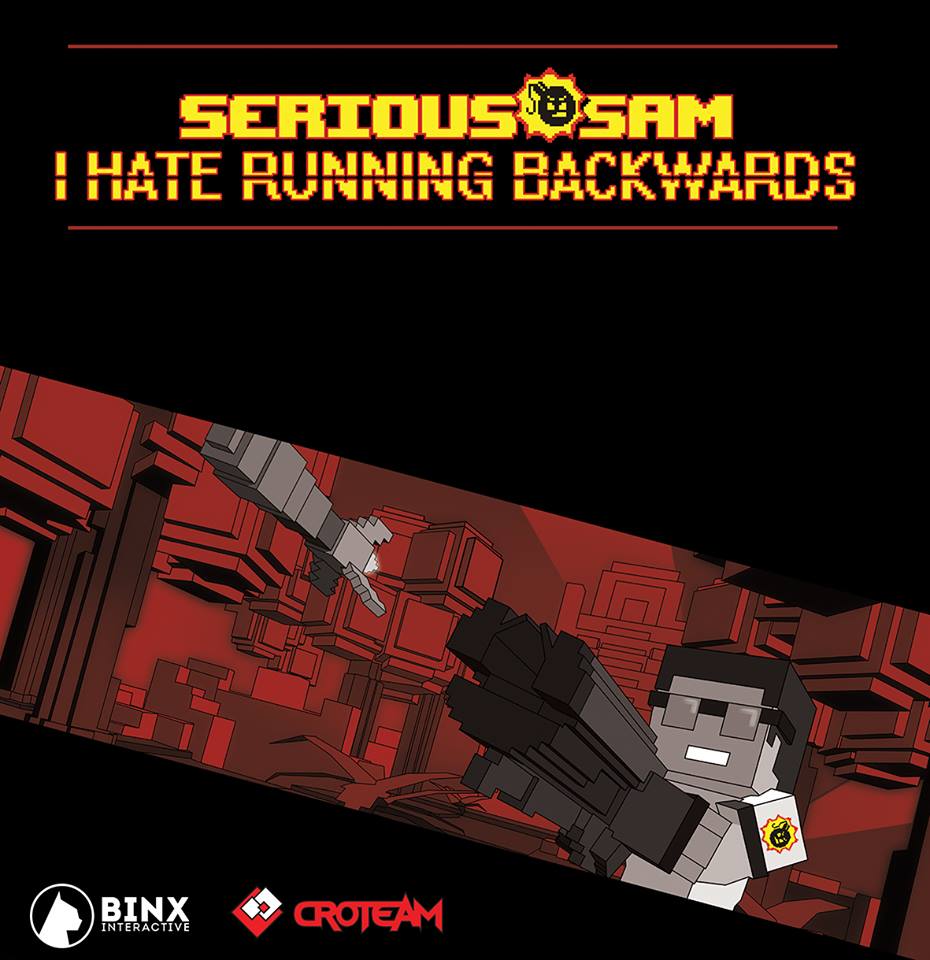 Our friends from Croatian game dev studio Binx Interactive are currently working on an interesting new project set in familiar surroundings. It’s an arcade shooter titled “Serious Sam: I Hate Running Backwards” which is in development for a few months together with the members of our team.

Game was presented at this year’s Reboot InfoGamer in Zagreb where it received indie award for the best gameplay.

More details regarding the development of this new exciting project can be found in the latest article on GameIndustry.biz.

I was asked not too long ago what lesson I thought the UK development scene would be wisest to learn from teams in Europe. My answer came quickly — the spirit of co-operation and openness which has characterised my experiences with teams from across the continent.

At events all over Europe, from Digital Dragons in Poland to Unite in the Netherlands, or Gamelab in Spain, I see communities of small studios selflessly sharing opportunities and advice, making introductions, offering support. Of course, it’s happening here, too, and I don’t mean to suggest that it isn’t, but the period which our domestic industry spent occupied by major studios, often owned by competing corporate interests, was one in which that sort of attitude wasn’t encouraged. When some of those bigger outfits collapsed, spawning new ecosystems of indies which revelled in this culture of community, it was one of the most positive changes which some development hubs had seen in decades.

Rezzed, one of my favourite events of the year for obvious reasons, has illustrated this shift brilliantly, attracting more and more small teams every year; teams which increasingly greet each other as old friends and welcome collaborators. It’s a genuinely wonderful thing to witness and a great testament to the fact that the UK is very much moving in the right direction.

But in countries where the industry is only just beginning to establish itself, where those bigger teams have only existed for a few years and tend to be privately owned, we see a different pattern. In the Balkans, for example, a region so recently harrowed and divided by bitter conflict, big successes like Nordeus and Croteam are reaching out to create and support that framework of mutual benevolence, to encourage the grassroots and grow the region as a whole.

At Reboot Infogamer in the Croatian capital of Zagreb earlier this month, I came across a small indie booth. Just four TVs, some beanbags and a sofa, plus an exceptional leopard print lamp, the booth was nonetheless showcasing a spin-off for what is undoubtedly the biggest of the locally developed IPs: Croteam’s Serious Sam. The story of the small team attached, Binx Interactive, exemplifies the passion and trust which is driving the region’s growth.

«I met with the Binx guys in April during Reboot Develop conference in Split, where they were part of an indie dev area,» says Croteam’s Damjan Mravunac. «They showed me some of their mobile games and asked me later for comments and how could they improve gameplay.

«What usually happens then is that you share your opinion and try and give constructive critique, but it gets lost after the show and devs mostly forget about it, which is perfectly normal, as everyone is there to play games and everyone has something to say… But this didn’t happen with Binx. They took notes (pen and paper!), made improvements to the build, and asked me to take a look at a new version only a few days later, when we were back in Zagreb. During that meeting an idea of making arcade game in Serious Sam universe was born.

«We brainstormed for a few hours about core gameplay and graphic looks, but the first version I got to play, only a month later, really blew me away, as the guys improved all of our original ideas and made something really special. In that moment Binx showed all the virtues of a future great dev studio, and we knew we could trust them completely with making a game worthy of Serious Sam series.»

«What usually happens then is that you share your opinion and try and give constructive critique, but it gets lost after the show and devs mostly forget about it»

That game, ‘I Hate Running Backwards’, takes its inspiration from a line in Serious Sam, triggered if the player spends too much time backpedalling away from enemies. It’s a frantic, top-down shooter where players flee backwards through a procedurally generated corridor of terrain as waves of the series’ monsters charge towards them. After 1000 metres, a boss appears. It’s not overly complex, and has a simple, almost Minecraft-like blocky appearance, but it’s absolutely fantastic, especially when played in sofa-co-op. In fact, the team ended up walking away with the prize for the best gameplay of the show, without even realising they’d been nominated. For a studio of Binx’ size, it’s a hugely important deal.

Producer Adam Mehtić explains the origin of the partnership.

«We were working on a simple one-tap mobile driving game that was being developed by only two members of our team. Players would turn 45 degree corners with a single tap and there was some drifting and spinning involved in there as well. We showed the game to Damjan from Croteam and asked for his feedback. Some back and forth happened via e-mails and we started communicating on a weekly basis. When they saw that we were constantly making progress on the project, they offered us a chance to work on the ‘Serious Sam’ spin off game. And that of course, was an opportunity that we could not refuse. Since then we have been sending them builds, constantly improving the game.

«Working on an IP as big as ‘Serious Sam’ is an honour and a challenge at the same time. There are certain expectations from us and we don’t want to disappoint. But we always considered ourselves ambitious and we are pretty sure that we are up to the challenge.»

Binx is already on an impressive trajectory, but Mehtić acknowledges that it’s been a combination of persistence, hard work and a little luck.

«We started out a couple of years back as enthusiasts trying to make games for fun, to see if we were up to it. Some of us knew each other from our gaming days, some through mutual friends. We communicated through a closed Facebook group on a daily basis. At first we started developing a puzzle platformer game, as well as a couple of mobile games. We iterated a lot and we iterated quickly, and all that work brought us our first clients. We did outsourcing jobs for other studios ranging from QA to programming and 3D modelling.

«Last year at Reboot InfoGamer 2015, we brought our own TVs, sofas, tables, lamps, chairs, bean bags, PCs, monitors and tablets for showcasing our games — almost everything was our personal stuff»

«Since we didn’t have enough cash flow coming through our studio, we picked up jobs in other game dev studios in Croatia to get by somehow. We started showcasing our games on conferences and expos like Reboot Develop and InfoGamer, and even participated (and won) in the fifth edition of the biggest game jam in this part of Europe — Nordeus Hackathon. This year we started collaborating on projects with major regional game dev studios such as Croteam and Mad Head Games.

«It doesn’t get much more bootstrapped than that! Last year at Reboot InfoGamer 2015, we brought our own TVs, sofas, tables, lamps, chairs, bean bags, PCs, monitors and tablets for showcasing our games — almost everything was our personal stuff! But the fun thing is it made our booth look unique, which is what we were aiming for. People were commenting how it had that cosy living room feeling and that once they came to our booth to play the games, they didn’t want to leave. Since every other booth had the same vibe to it, it made our booth pop.»

Of course, not many indies are founded with the dream of working on someone else’s IP. Whilst Binx appreciates that Croteam is offering it an incredible opportunity, there’s a definite belief that this is something which moves them closer to the final goal of self-determination, rather than a comfortable place to settle down.

«We look at every project as ‘the key project’ for our studio,» says Mehtić. «That’s the only way we are going to be able to make great quality games. But, since this is a well known IP, there are certain expectations that we have to live up to. We are hoping that these kind of projects will be able to give us enough time and financial boost so we can expand our horizons even further, and create games that would usually be on our ‘now-is-not-the-right-time’ list.

«Having big developers for support is always a good thing. The local community isn’t especially big, so most of the studios know each other»

For now, though, Binx is extremely grateful for the boost offered by working with a well-known name and a talented local studio, and are already working on a game with another local company, Mad Head Games.

«Having big developers for support is always a good thing. The local community isn’t especially big, so most of the studios know each other. Not only in Croatia, but in the wider region as well. We are always able to reach out to any of them for help or support, and of course that means a lot to the smaller indie developers. Another big help for us are the devs from the Serbian Mad Head Games studio, who we are also collaborating with on a mobile F2P game ‘Catch Match’. Getting to learn from the local champions and having them to help us not make the mistakes they made and avoid the pitfalls of the industry is something that we are very grateful for.»

Of course, this is a business partnership, and gratitude only goes so far, but Binx looks like it’s going to repay Croteam’s trust in full. I ask Mravunac if he feels that Croteam has a duty to help his countrymen, to develop the region.

«A duty can sometimes be interpreted as a burden, so I’d avoid that word,» he laughs. «We just want to help all promising devs, because we think there are many great games to be made and many more stories to be told here in our region. And, since our scene is still small, we need to stick together and act as a community, not treat each other as competition. Luckily, all the local devs are on the same page.»

SSVR: TLH – Get ready to get Serious; The Skills and Power-Ups update is LIVE!